God Hermes was the messenger of the gods, preacher and protector of commerce, travelers and bandits as well. He was also a soul transmitter, leading the souls of the dead to Hades. He was son of Zeus and Maia. Cunning from his birth, a few minutes after he was born, and while his mother was sleeping, he stole god Apollo’s oxen, slaughtered some of them, and took the rest in his cave. Apollo got really angry when he found out and went to Maia to complain, while Hermes slept in his cot. Apollo, however, took him with him to Olympus, and he went to their father, Zeus. Zeus of course, was not fooled by Hermes’ lies, and he demanded from Hermes to show Apollo where he had hidden the oxen, and from Apollo to forgive Hermes. Hermes, after giving back the oxen to his brother, gave him the lyre as a present in order to pacify him. Apollo, enchanted by its melody, gave Hermes the clergy – who always carried it upon him, and vowed that he would not love any other son of Zeus like him.

Hermes’s symbols were the Caduceus (a wooden thin rod with two snakes wrapped around it) and winged sandals.

The statue of god Hermes that you hold in your hands is made in Greece by alabaster, a kind of translucent precious marble. Our colored statues are hand-painted, while all our products are distinguished for their incomparable quality and attention to detail. 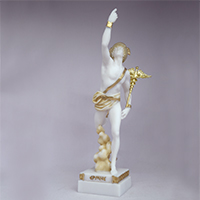