Icarus was the son of Athenian Daedalus, who had been expatriated in Crete. Together with his father, he stayed in the court of Minos, who had commissioned the skillful and ingenious Daedalus, to build the Labyrinth and imprison the Minotaur. After a while, however, Daedalus fell into the king’s displeasure, who imprisoned him in his own construction. Daedalus, though, managed to escape by putting his intelligence in action. He constructed wings for Icarus and himself, with which the two men flew to the sky, moved away from Crete and reached city Kamikos in Sicily. Icarus, despite his father’s advice, who told him not to be near the sun, flew to a great height. His waxy wings melted from solar heat and Icarus fell into the sea, which has since been called Icarian Sea and the island that he was buried in, Icaria.

The statue of Icarus you hold in your hands is made in Greece by alabaster, a kind of semi-transparent precious marble. Our colored statues are hand-painted, while all our products are distinguished for their incomparable quality and attention to detail. 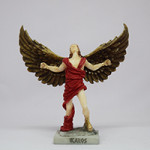