Ares was the god of battle and war. He was always thirsty for blood and his basic feature was the irrational mania and the lack of any kindness. He was the son of god Zeus and goddess Hera, and therefore, a brother of the god Hephaestus, goddess Eve and goddess Eileithyia. He had an illicit relationship with goddess Aphrodite, who was married to his own brother, god Hephaestus. When god Hephaestus trapped them with invisible ropes, god Ares became, from a blood-warrior, mocked by all the gods of Olympus. Angry, humiliated and embarrassed when he was released, he left for Thrace. None of the rest of the gods liked him and especially goddess Athena, who hated him deadly. Although both were gods of war, there is a huge difference in what they represent. God Ares represented the bloodshed, violence, and the impulsivity of the war, while goddess Athena represented the mind’s strategy in the war. In the Trojan War, strategy of goddess Athena prevailed and god Ares got once again ashamed in front of all the gods when Athena threw him down to the soil.

His main symbols are the spear and the burning torch.

The statue of god Ares that you hold in your hands is made in Greece by alabaster, a kind of semi-transparent precious marble. Our colored statues are hand-painted, while all our products are distinguished for their incomparable quality and attention to detail. 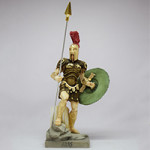