Dionysus was the god of wine, inspiration and festivity, and the most beloved god for the ancient Greeks. He was also god of drama and play.

He was son of Zeus and mortal Semele, and was born from his father’s thigh, where he was placed by Zeus himself to protect him from the fire caused by the jealousy of Hera.

After his birth, in order to get away with Hera’s persecution, he was delivered to twelve nymphs, Hyades, who became the gods’ nurses. Later, as a sign of gratitude for their service, Hyades were raised up in the sky, where they shine as the Hyades constellation.

When Dionysus reached adulthood, he discovered the vineyard and its use.

According to the myth, he wandered for a long time, teaching around the world his special ceremonies and the cultivation of the vine.

He was worshiped in noisy processions, involving the spirits of the earth and fertility, symbolized by masks. These processions created theater performances which had a more normal form, comedy, tragedy and satirical drama.

Therefore, the ceremonies in honor of god Dionysus constituted the beginning of the Ancient Greek Drama and, as a result, Theater.

Dionysus won a seat in the twelve Olympians (dodekatheon), when his aunt, the well-known goddess Hestia, gave him her throne, so that the gods would not quarrel, and she took over guarding the Sacred Flame.

The statue of god Dionysus you hold in your hands is made in Greece by alabaster, a kind of translucent precious marble. Our colored statues are hand-painted, while all our products are distinguished for their incomparable quality and attention to detail. 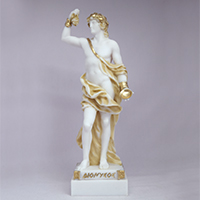