Discobolus, a bronze sculpture by sculptor Myron, dates back to 450 BC and is one of the first works in the history of art that depicts the athlete in an instantaneous pose. Although the original work has been lost, the marble Roman copies that have survived up to now, combined with Lucian’s description, led the studiers to match the copies with the bronze original of the classical times.

The athlete is depicted at the moment that he assembles all his forces in the execution of the shot. He leans strongly forward, turning his torso and his head to the right while at the same time bending the knees.

The overall standing of his body shows the intensity of the moment, while his face stays calm, emphasizing the discus-thrower concentrating to achieve the best possible throw.

Myron’s Discobolus is the result of a detailed study of the human body and touches realism. However, despite his free movement, the sculpture still retains some archaic residues, such as the fact that it is two-dimensional, with main side to be the front one.

The statue you hold in your hands is made in Greece by alabaster, a kind of semi-transparent precious marble. Our colored statues are hand-painted, while all our products are distinguished for their incomparable quality and attention to detail. 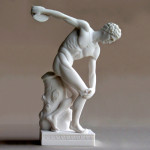