Aphrodite was the goddess of beauty and love. She was the most beautiful woman of gods and people. She was born from the foam of the sea, when Saturn cut his father’s Uranus genitals, and threw them into the sea. When she was appeared at Olympus, all the gods admired her and wanted her for their wife. Due to her beauty, the other gods were afraid that the competition between them in order to win her heart, would lead to a war. So, Zeus arranged her marriage with Hephaestus, who was not a threat, because of his ugliness.

However, goddess Aphrodite was not that faithful wife. She was often cheating on her husband (without him realizing it), and her most famous affair was with god Ares. One day though, Hephaestus trapped them, and all the gods saw their misfortune and were taunting them. Then, goddess Aphrodite, ashamed, left for Paphos.

In the Trojan War, which she definitely triggered by helping Paris kidnap Helen of Troy, the goddess took the Trojan side. Aphrodite’s symbols were the swan and the rose.

The sculpture is inspired from the painting “The Birth of Venus” of Sandro Boticcelli, an Italian painter, expressionist of Renaissance. It was created on about 1485-1486, and today it is hosted by museum Uffizi, in Florence. The painting shows goddess Aphrodite emerging from the sea, into a shell and behind her blowing Zephyrus and Aura, sending her to the beach. There, one of the Hours (goddesses of seasons) welcomes her and offers her a cloak. 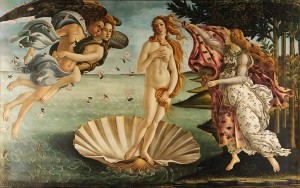 The statue of goddess Aphrodite that you hold in your hands is made in Greece by alabaster, a kind of semi-transparent precious marble. Our colored statues are hand-painted, while all our products are distinguished for their incomparable quality and attention to detail.