Hephaestus was god of fire, volcanoes, metallurgy and protector of the craftsmen. He was still the manufacturer of the gods’ weapons. He was the son of Zeus and Hera (or Hera gave birth to him on her own), but surprisingly, compared to the other gods who had divine beauty, he was the ugliest among them.

When Hera saw him for the first time, shameful and angry, she threw him from Mount Olympus. The infant god fell into the sea, where Thetis (deity of protection of children and maternal affection) and Eurynome (deity of the sea) surrounded him and raised him for nine years. Hephaestus, however, remained lame for the rest of his life. As soon as he grew up, the god immediately set up his first ironwork at the bottom of the Aegean Sea, forging there beautiful objects for these two deities.One day, Hera, jealous of Thetis’ jewels, when she discovered that they were made by the son she had despised, she took him with her, and brought him back to the Gods’ mountain. There, she offered him a blacksmith shop with 20 blooms and gave him beautiful Aphrodite for his wife.

But goddess Aphrodite was not that faithful wife. She was often cheating on her husband, and her most famous affair was with god Ares. Until, one day, Hephaestus trapped them, and all the gods saw their misfortune and they were taunting them.Hephaestus was good-hearted and got hurt when the gods were mocking him for his disability and ugliness.

His main symbols were the hammer, the anvil and the forceps.

The statue of the god Hephaestus that you hold in your hands is made in Greece by alabaster, a kind of semi-transparent precious marble. Our colored statues are hand-painted, while all our products are distinguished for their incomparable quality and attention to detail. 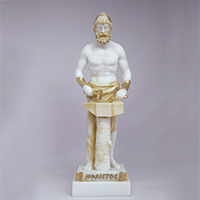